One thing synonymous to healthy growth of a child is MILK. We’ve all grown up drinking milk throughout our early life and are still continuing to do so.

While I have already discussed about the need and negative impact of milk on an adult, let’s explore just how much milk is good milk even for a child. Especially when everyone around us advices to give the kid “THE HOLY WHOLE FOOD”.

Why is milk loved so much?

Well, milk is after all the first thing a baby tastes and consumes after it is born. Thus, a huge amount of importance is attached to the first food and rightly so.

Milk is extremely beneficial for the initial growth and development of the brain, bones and overall health of the baby. Hence, you can see every mammal in the animal kingdom feeding their babies. And while you recollect that, you might also want to realize that every other specie stops breast-feeding the new born after a certain amount of time. It is only the humans that have resorted to subjecting the child to excess of milk, hoping the excessive amounts will bring in more positive results. But even here, the age old adage stands true – “Too much of anything is bad!”

Milk is good but to what extent?

The healthiest milk out there is cow’s milk and your baby is bound to move on from breast milk or bottle fed milk to whole milk eventually. But know this, NHS guidelines state that ‘whole cows’ milk can be given as a main drink from the age of one.

Starting milk isn’t as big a problem as knowing when to stop. While some parents have been told by health visitors to stop giving it from the age of two, others have been told there is no harm carrying on with it until children are older. It is also recommended moving to semi-skimmed once a child is two. But that’s only if a child is a good eater and growing well for their age. And providing a child isn’t overweight, there is no harm in carrying on with full fat milk until they are older. 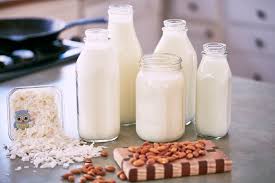 What are the problems with cow’s milk?

How should I administer milk to my child?

Hope this is information enough to take the first step in your journey of making your baby the healthiest and happiest. It is always recommended that you consult your doctor before making any changes. Should you have any questions, drop a comment below and I will be happy to help you out.

Make a one-time donation to buy me a coffee so I have the fuel I need to keep producing great content.

Or enter a custom amount

DonateDonate monthlyDonate yearly
Processing…
Success! You're on the list.
Whoops! There was an error and we couldn't process your subscription. Please reload the page and try again.

4 thoughts on “Milk – Not your Child’s Best Friend”